It’s been a long day.

I’m taking advantage of the fact that my good friend is a teacher in Lycée (High-school) in Bayonne and have observed 5 different lessons with 4 different language teachers in her school since 9 o’clock this morning.

Although I am a fully qualified English teacher in the French system, I have’t taught in Lycée for years. I might as well put my current status as a lady of leisure to good use and get up to speed on what has changed since then.

Sorry. I just needed a quick break to get back my breath from laughing. With 3 kids, “leisure” is a vague and distant memory, even without a second job outside the home. It’s a word in the same category as “Sunday morning lie-ins”, “peace of mind”, “choice of TV programme”, and “waistline”. (sigh)

So, I listened to teenagers massacre, successively, the Spanish, German and English language, and took copious notes on classroom management and the use of the blackboard. Teaching is such a fascinating profession!

Nevertheless, by the time 5 o’clock came around, my brain was fried and I took a walk downtown Bayonne to clear my head and to have a cold beer.

Oh! So it does look like I have a little time for leisure! I suppose I ought to mention that while I am gallivanting around the Basque Country, it is my dear husband who is looking after the kids, handling the school run and suffering through the homework with them. I suppose I ought to thank him.

Bayonne is said to be the port through which cocoa beans first arrived on French territory. Portuguese Jews, fleeing the Spanish Inquisition, arrived in the Basque Country with their cocoa beans and their savoir-faire. They were set to become the chocolate kings of France… until a law came into effect forbidding them to sell their chocolate, which opened the chocolate trade for local merchants.
In Bayonne, chocolate shops stand cheek to jowl. I tried three. (I’ll let you know what the jury says.)

There were several very old-fashioned ones, with porcelain thingies and dusty window decorations. They didn’t tempt me. There were others, built like jewellery shops, with little chocolates presented in gilded boxes and with large price tags. They were pretty, sure enough, and I did buy a little box of chocolates from one place called Pariès, a chocolaterie dating back to the 19th century. The one I liked best, one I actually know from Nantes, is L’Atelier du Chocolat. Both have chocolate factories you can visit.

Instead of only making traditional chocolates, L’Atelier du Chocolat makes thin, sheet-like chocolate folded loosely and available in white, milk and black choclate, either plain or with all sorts of inclusions: chopped pistachios, coffee beans, roasted sesame… The staff break off chunks and assemble them into “bouquets” that look lovely, even to a chocolate hater like me.

Their top seller at Easter is a chicken’s egg whose shell is filled with black chocolate. Except for a small hole plugged with a little round sticker, they look the real deal. One year, I bought four of them and put them into ordinary egg cups for my four men at home. They tapped and tapped them with their spoons before eventually complaining that Mum had boiled the bejaysus out of their soft-boiled egg… 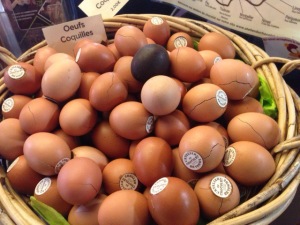 It turns out I just missed the Fête du Chocolat which had taken place last weekend. Shops and bars all around the town had put up signs with local culture questions (tricky ones). If you knew the answer, you got a free chocolate!

There are many, many other delicatessen shops in Bayonne. Spanish ham, local charcuterie, cheese shops, ice-cream parlours… I stopped in one of several tea shops, pulled in by the tantalizing flowery smells wafting out the door, and spent a happy half-hour chatting and tasting and sniffing. I bought a small bag of super special Darjeeling. The staff were charming, and the selection was positively breathtaking. It’s worth stopping by. La Compagnie Anglaise des Thés, 13 rue Port-Neuf.