It’s been a day for detours.

I was on my way to University College Cork to do a bit of research at the Boole library and was just driving up towards the big roundabout beside the Wilton shopping center when I saw a bunch of colourful little tents over the top of the hedge separating the car park from the road. I figured it was some sort of market, so I drove around the roundabout once, then again while I decided whether or not to investigate.

I’m so glad I did! I was an hour and a half late to the library, but it was totally worth it.

For a bit of context, my Irish Granny, who was a decent homecook, was not very adventurous when it came to food. She loved a nice stew, enjoyed a juicy bit of chicken, the holy Irish trinity (carrots, spuds and cabbage) and had a sweet tooth. She did not, however, enjoy most of the “foreign” stuff my (Swiss) mother would cook. She had never eaten savoury rice, for example, and tasted a single grain of rice before declining a bigger serving “Oh, I wouldn’t like that at all now…”. My cousins dreaded my Mum’s cooking, too. Sometimes they would go home hungry, because they had hated what she cooked. One day she made Jansson’s Temptation, a Swedish potato dish with anchovies – my cousin Caroline was traumatised by the “hairy fish” (and we still call anchovies that to this day).

As I went round and round the farmers’ market in Wilton today (I told you – detours), I thought of Granny a lot. What would she have made of all the spices, kidney bean brownies, lentil salads and curries being sold there? Maybe she would have joined the Irish food revolution, for there is no denying that Irish food has come a long way in a short time.

First, I came across a young man stirring curries. He is a chef working for a Midleton-based company called Green Saffron that imports spices directly from India and grinds them in Cork to control the purity of the spice powder. They also make ready-to-cook curry sauces and do curry catering at markets and for functions all over Ireland.

Next, I met a young woman called Sarah who makes non-traditional baked goods with all sorts of wheat and butter alternatives, like beans and seeds. Her brownies are moist and delicious, and her quirky Protein Energy Balls look fab. Her company is one year young and growing – why not check out the Bean Brownie Company’s Facebook page?

By the time I had chatted my way across one side of the market it was almost noon. I stood in front of The Rocketman and had to make a choice. Three choices, really – Josh, the young gent manning that stand had a great deal going: for only 5 Euro you can choose 3 of 6 beautiful salads on offer, then choose 1 of 3 yoghurt sauces (mint, garlic and lemon or coriander and tabasco). I had trouble deciding, so he let me choose 4 salads “Well, since you have a food blog and all…”, he said. First perk because I blog, guys! Next they’ll be sending me Moët & Chandon for tasting… 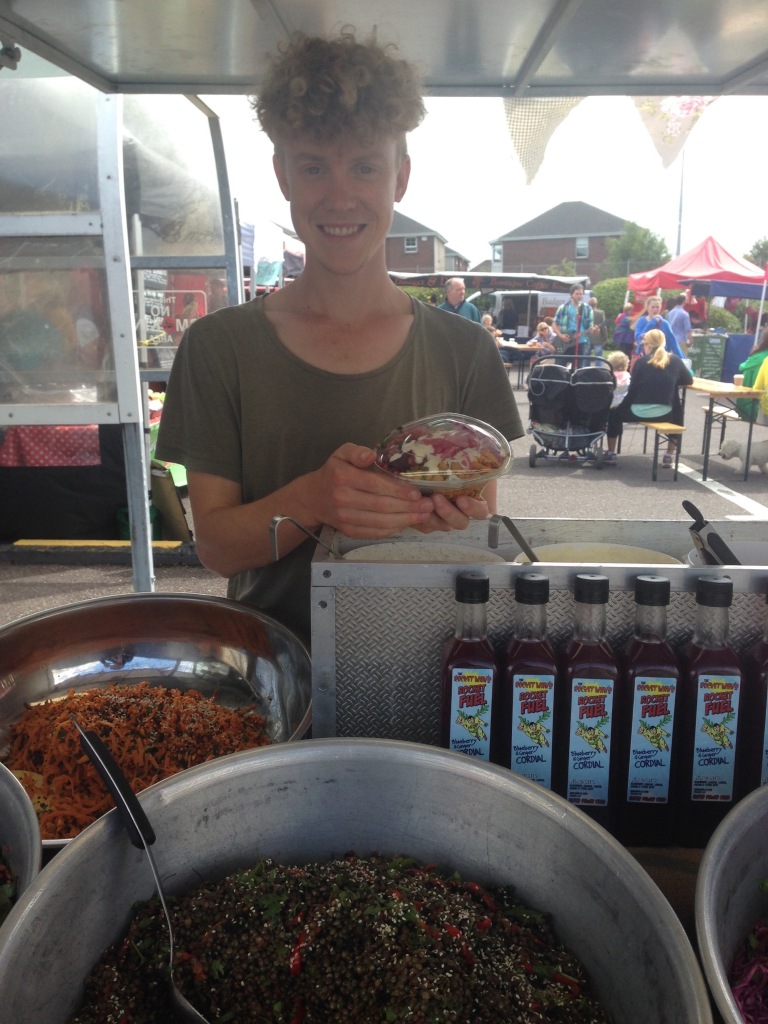 I walked on about 3 metres – the good food is thick on the ground here – and stood in admiration in front of an impressive display of chocolate lollipops and cutie-pie cake pops. Dennis, from Germany, is The Chocolate Fairy. He gets his chocolate from Switzerland and Belgium and makes these lovely edible creations. It’s hard work, with 5 different stages needed to make the cake pops. Dennis also does special events and cakes for birthdays and other occasions. Here is The Chocolate Fairy’s Facebook page. I stood and chatted for another while (found out that Dennis is a brand new dad) and met a friend of his with a great sense of humour and the cutest accent that mixes Dutch with a classic Cork lilt.

I bought a Fiery Dragon Pie for my father from West Cork Pies – “Made with West Cork dragon tails!” Their philosophy is deliciously simple: the best, local, traceable, from farm to fork to make ready-to-eat meat pies and quiches. Yum! 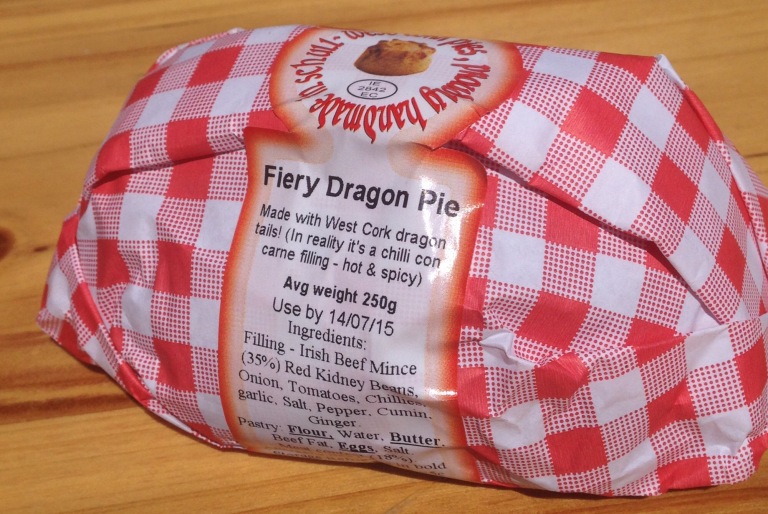 The Rocketman had told me he gets his yoghurt from Timmy, from McCarthy’s farm in Macroom. He has a stand at the Wilton Market, too. It’s just a little fridge on wheels, but on top of the usual milk, Greek-style yoghurt and cream, Timmy sells red-berry smoothies and lemon-flavoured labneh, a Middle-Eastern type of yoghurt that is strained longer and is therefore thicker than other yoghurts. It tastes a lot like cheesecake and is all natural. McCarthy’s might well be the only labneh producers in Ireland! While I stood there talking, a Turkish kebab shop owner came and ordered a load of it.

Timmy told me something I found absolutely fascinating and which I am determined to find out more about. McCarthy’s have about 60 cows, mainly Holstein Friesians for now, but there are plans to replace them progressively with another race that is more robust (and whose name I have forgotten. Something Scottish, perhaps?). Anyway, he knows all about what and how much the cows eat, when they pasture, for how long, etc. So we were talking about grazing and milk production and he tells me the cows are milked by a robot called the Lely A3 Astronaut. What a cool name for a cool machine that allows the cows to get milked when they feel they need it! They can access the milking machines 24 hours a day by themselves. Having watched my great-uncle and my hubby’s second cousin milk their cows manually with a one-legged stool strapped to their arses, or mechanically by attaching the pumps one by one to each of their cows, this is nothing short of revolutionary, both for the animals and for the farmers. Timmy innocently invited me up to the farm to take a look – he doesn’t know that I am just the kind of woman to take him up on his offer…

Of course Timmy isn’t the only one to sell dairy products in Ireland – he even has some steep competition in Wilton from the Glenilen Farm in West Cork. The yoghurts look great and fruity and there is a fancy range of chocolate mousse, panna cotta, cheesecake and other desserts made with their own high-quality milk. What caught my eye, however, were the long rolls of butter on the side of the refrigerator that made me want to go home and make toast right then and there.

There’s a pretty nice cheese stand, too. Not as diverse, perhaps, as what I can get in France, but with Mozzarella-style cheese made in Macroom from Irish buffalo milk and locally produced Ricotta-style curds. 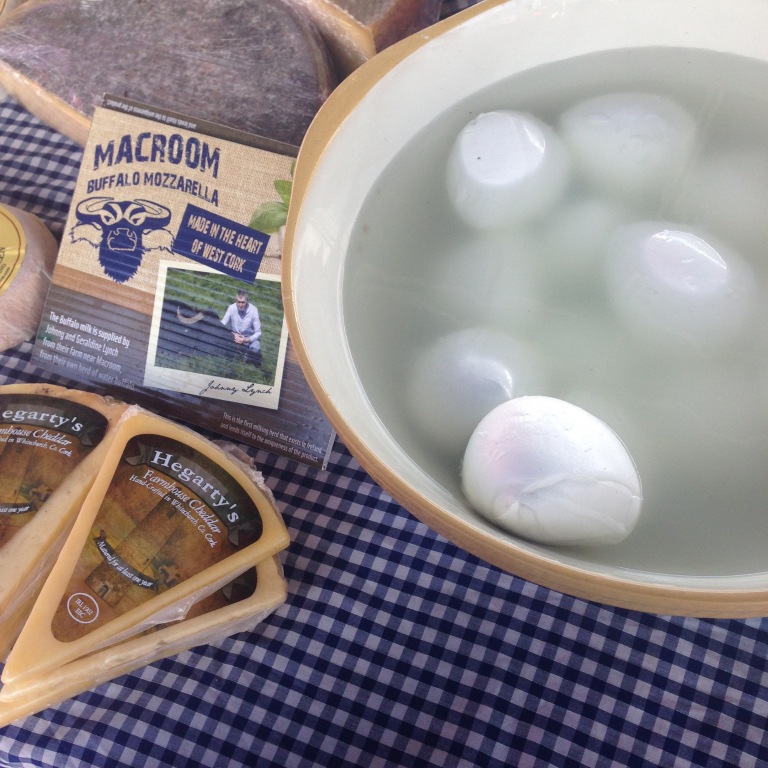 For cheese, you need bread, and again, this market has it all. Sourdough bread, bagels, baguette, foccaccia, Kaiser buns with sesame seeds… It’s the Arbutus Bread stall. I missed the main man – Declan Ryan, winner of Ireland’s first Michelin star –  because he was busy with some customers when I strolled past the first time and had been replaced by a young man who answered my questions graciously. The bread, however, speaks for itself. Just come taste it. 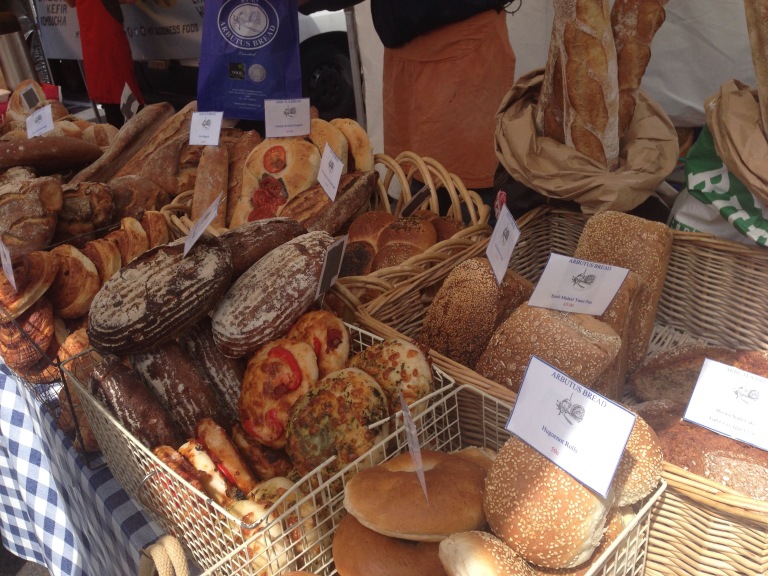 For a full list of companies that sell at the Wilton Market, you can go to the market’s website. I already love the names: Vegilicious, Serendipish, The Badger and Dodo (Boutique Coffee Roasters), GemSushi, SensAsian Food, Baking Emporium… Sadly, I had already eaten my salads and simply couldn’t fit anything else, because every one of the Loving Salads for sale looked, well, good enough to eat (black wild rice, butternut squash, black pepper and date syrup, anyone?).

I eventually set off to the University only to find the road was blocked and I was sent on a detour of the road works. It was a day for detours…