We went for a drive with my sister and the kids to take a walk along the beaches of East Cork. We had had no real plans for the day, but as we stood watching the children roughhouse on the rocks in Ballycotton (one knee bled, no tears shed), we decided to call the restaurant at super-famous Ballymaloe House on the off chance they would have a table for ten.
They did.

The website describes it as “Ireland’s most famous dining room, located in an idyllic country house, set in stunning gardens and surrounded by a 400 acre estate”. We drove up the leafy drive with fields and trees on either side and parked a few steps from the entrance of the ivy-covered house. The weather was holding, with a sky hesitating between sunshine and showers, and the house indeed was a pretty sight. 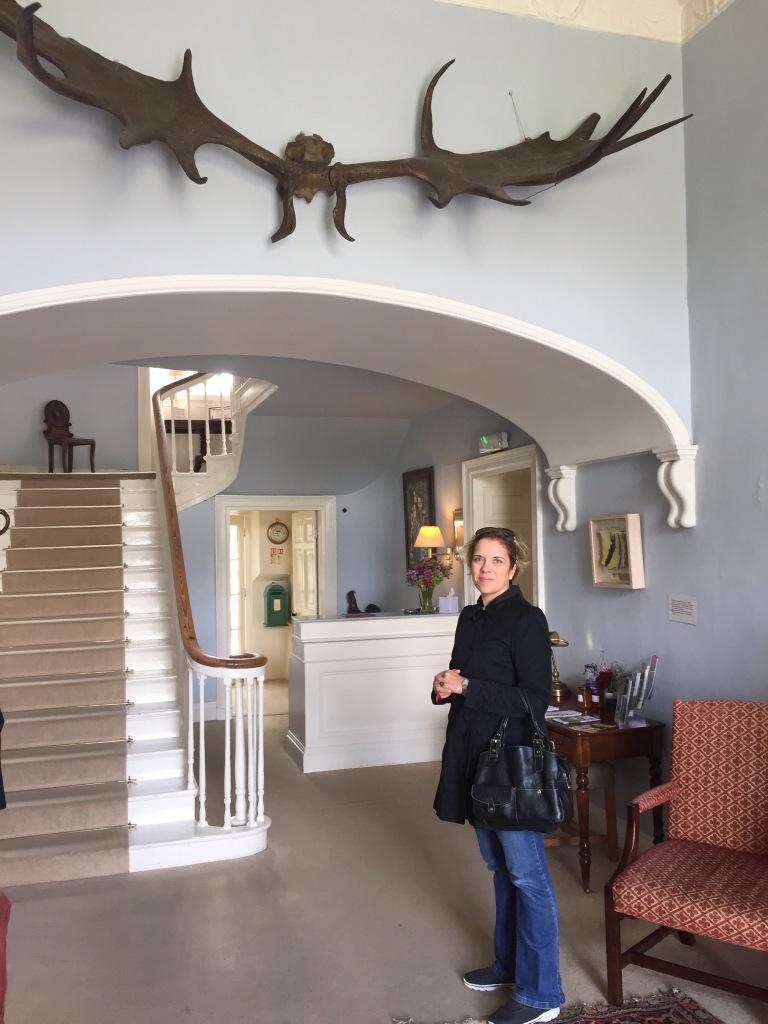 We combed our kids’ hair and straightened our collars before going in, but we realized very soon that these precautions were, really, unnecessary – for all the high ceilings and old-style wallpaper, the atmosphere was rustic. That is fine for a “country house”, but for a 4-star hotel of international renoun, the flip-flops on the guest by the window and the robust way we were handled by the waiting staff was surprising.

We settled down and took our time reading through the menu and wine list. The choice of wines was – according to my French brother-in-law who knows his stuff – good. He ordered a bottle of white Burgundy, a 2012 Viré Clessé. It was really lovely. In fact, we ordered a second one halfway through the meal. The problem was that the first bottle was not quite cold enough, and the second one hadn’t even been in the fridge and needed chilling while our glasses were empty. The waitress let Didier try the wine, filled all our glasses… except his… then took the bottle off the table, not to be seen again for a long time. I was seconds away from pouring some wine from my glass into his, out of pity, when she reappeared with the bottle and a bucket of ice.

The lunch menu is set, with 5 choices for starters, 5 for the main course and a dessert trolley. Two courses cost €32, three cost €40 per person, and children can choose like adults, but get (generous) half portions for €19 (which is still the dearest children’s menu I have ever seen). Since we saw the sweets trolley trundle by and were not bowled over (meringues, some red fruit and what looked like pre-scooped ice-cream and sorbet), we decided on a two course lunch.

It is fair to say that we are not easily impressed – we have eaten many good things in our lives – but we are never out to criticize unnecessarily. In this case, I was rather excited about eating at Ballymaloe House – after all, I had heard and read so much about it – but reading through the choices, I didn’t feel terribly inspired. Hum. Paté de campagne? Crab mayonnaise? I ended up taking a green salad with blue cheese and walnuts. It’s a classic, but I love leafy things. 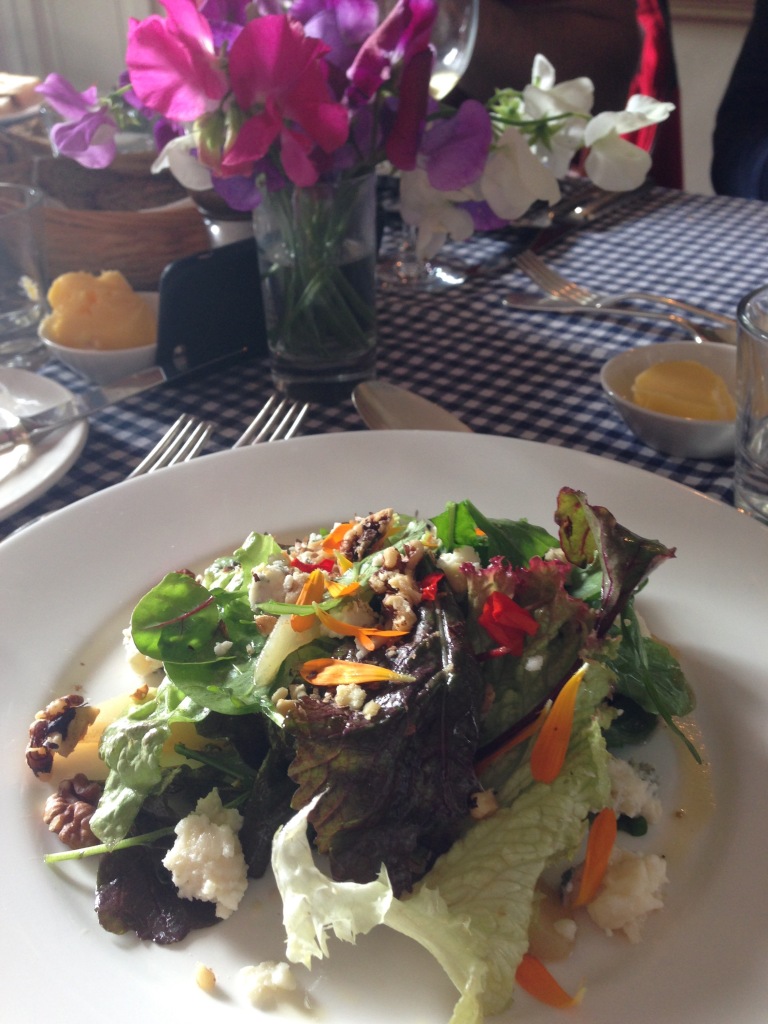 It was nice, but unexciting despite the edible flowers and a variety of leaves. My sister’s crab mayonnaise was no bigger than her son’s half portion, however, and the crab and mayo mix was served simply spooned onto the plate, with no effort going into the presentation: it looked like a pink puddle.

We had had a bit of a family barbeque with steaks and sausages the day before, so for the main course, I opted for the Ballycotton-caught hake. Also, the beetroot and lentil-stuffed pancake didn’t tempt me, and neither did the glazed ham. I actually almost ordered the fish just for the samphire and spinach that went with it (I have a bit of a samphire obsession at the moment), but the hake was fresh, well prepared and simply delicious – but… unexciting. Between the 10 of us, we had ordered just about every dish on the menu so I got a good look and even a taste, and I think I probably made the right choices.

Side dishes of spuds and carrots were set on the table for everyone. Some were also unceremoniously dumped in your plate, whether or not you wanted any. We all agreed that both the potatoes and the carrots were good, because they had a nice, just-out-of-the-field taste to them, but let’s face it that jacket potatoes and boiled carrots in big chunks are what my Granny (God rest her) used to serve for Sunday lunch at home and is not anywhere near the level of finesse that I had expected from a restaurant that boasts of its links to a internationally famous cookery school.

The brown bread was nice, but at one stage we had no fewer than 7 large blobs of half-melted butter on the table with it. There were fancy-ish water bottles on the table with water supposedly bottled from a well at Ballymaloe Farm, but it tasted just like tap water. There was no espresso. Only filter coffee in tea cups and sugar lumps served in a broken and glue-repaired Stephen Pearse sugar bowl.

The food wasn’t bad, but it was basic, it was traditional, and it was completely and thoroughly boring.

What really bothered me, however, was the service. I am not a fan of the overly obsequious staff at, for example, the Meurice in Paris or the Château Cordeillan-Bages when Thierry Marx was still cooking there, but the Ballymaloe House staff was more than a little rough around the edges. It sometimes felt like we were in lunch lady land. Some of the staff were downright gruff.

I enjoyed the sculpture exhibition set up in the gardens with a little path through a magnificent barley field. 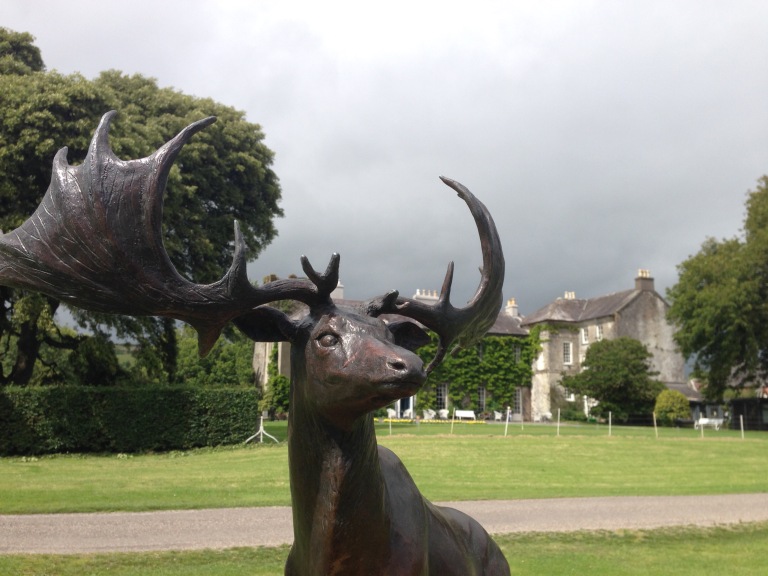 I didn’t enjoy the gift shop half as much. I didn’t much feel like buying a cookbook by someone from the Allen family after the lunch we just had. I need a cookbook to inspire me or to teach me something new. (I saw a cookbook there by Arun Kapil, the guy who runs Green Saffron, one of the companies present at the Wilton Farmers’ Market in the Ballymaloe shop, as well as some of his spices. I wonder if he has done the Ballymaloe cookery course?)

I am afraid that I was sorely disappointed. The gastro-myth that is Ballymaloe has been busted… and with it – for me – the credibility of the cookery school has taken a hit.

Would I go back? I don’t think I would.

I didn’t expect that.