This post is not about Hallowe’en. I have not come up with a way to get my children to eat apples with raisins for eyes and almonds for teeth instead of sweets and Maltesers, no. Neither have I created an easy-breezy table runner of mosses, miniature pumpkins and spray-painted twigs for my cool adult Hallowe’en party. I am not having any parties that involve anything more elaborate than dialing for pizza these days. Studying for two graduate programmes and managing a 5-head family has pretty much robbed me of any strength and imagination and most nights I lack even the energy it takes to get off my chair once dinner has been eaten.

That is how one evening I found myself face to face with a little parcel from the butcher’s with no idea what was in it. I remember running from one school pick-up to the farm veg collection point, past the butcher’s and on to the secondary school and stopping to buy something for dinner. I remember looking at pork “carbonade” and “araignée“, duck “tournedos” and steak, and thinking that it was either too expensive or would taste better on the grill or whatever. I don’t remember buying the stuff in my parcel.


It eventually dawned on me: pork cheeks (not butt cheeks… the other end). What was I thinking? I guess it was the old French saying “Tout est bon dans le cochon.” – all is good in the pig. But I also suddenly remembered the butcher telling me they would take at least an hour and a half to cook. Drat. I had been counting on “à la minute“… So it was pasta with garlic, olive oil and parmesan for dinner that night, and I made plans for the following day. (The kids, of course, were delighted. “Yaaaaaay!” Bowtie noodles with nothing on top! And no vegetables! “Yaaaaaaay” I swear, sometimes I wonder why I bother at all.)

One gets one’s inspiration from unexpected sources. A few years ago I saw the movie “Les délices du palais” where Catherine Frot plays the personal chef to the Président de la République (played by France’s national treasure Jean d’Ormesson). It’s fictional, but the president has some character traits and the failing health of a certain François Mittérand… There is a scene towards the end where the chef is confronted with a nutritionist who asks her to exclude all “plats en sauce” from the president’s diet – dishes which in culinary terms would be served in a sauce made with butter, flour, perhaps cream… The two women have an argument about just what the word “sauce” means, and the chef describes a dish where she alternates layers of meat and onion in a cast-iron pot before letting it cook for hours, creating “du jus“, the juices that run out of the meat and onion – not “de la sauce” – to create a succulent dish.

So that’s what I did. Kind of. With whatever I had in the fridge and pantry, which included some scruffy leftovers from last week’s organic vegetable delivery and 2 potatoes. 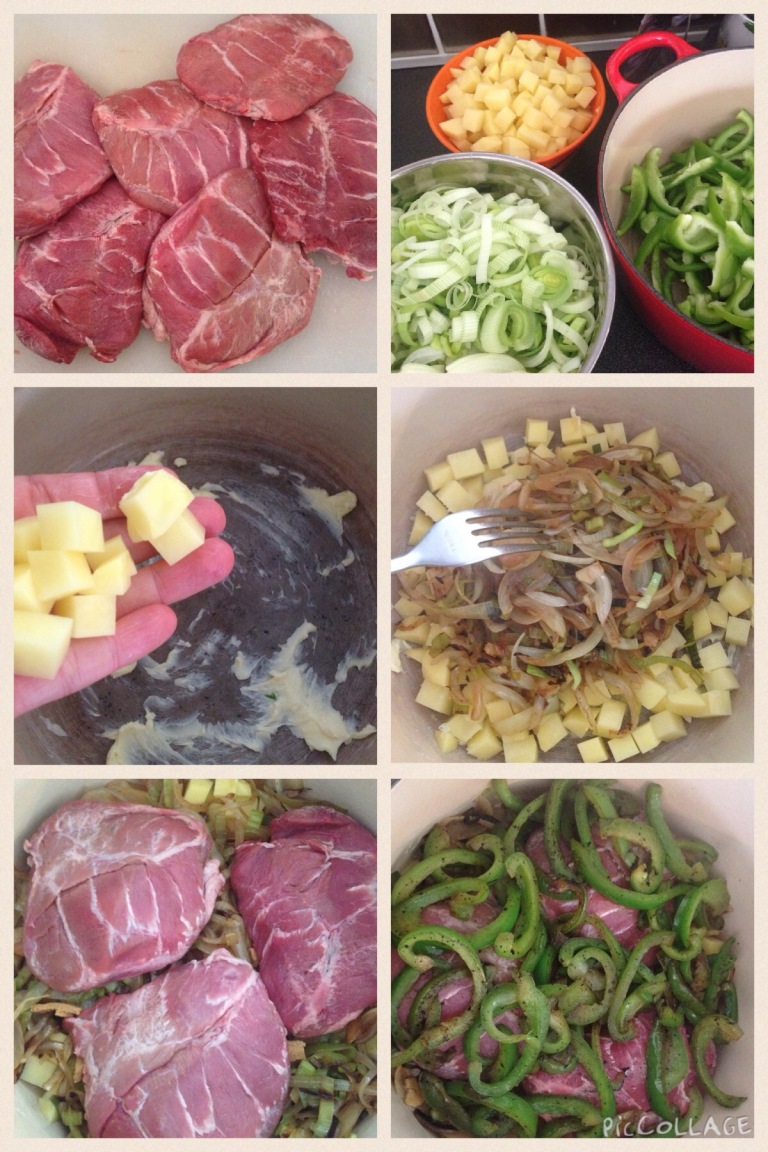 How it turned out:

It smelled great and was delicious. There was no need for a knife; the meat was juicy and came apart under the prongs of my fork. I served it as a complete dish, since there was potato and other vegetables in it. It looked nice, too. The photo doesn’t do it justice. 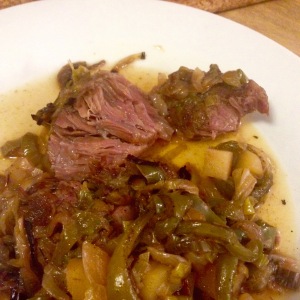 What I would do differently:
Nothing, except that the juice is necessarily very runny and could be strained into a saucepan and thickened with a bit of corn starch or cream. Conversely, I might add more liquid (water or beer) and turn it into a kind of soupy pot-au-feu-type thing.

I might also leave out the potato and serve it with home-made mash with thyme.

Bottom line: It was cheap and tasted good. It took just a few minutes to prepare the vegetables, but then it was a hands-free dish until serving time. I am definitely buying pigs cheeks again. At under 10 Euro a kilo, it’s a pretty good deal.