Bordeaux is very pretty. Especially since they renovated the quays and built a fancy modern tram in the centre.

But I am afraid I won’t have time to see any of that. Truth is, I’m in town to sit an awful, horrible, stressful competitive exam and I am lodging in a hotel situated in the bermuda triangle that is between the train station, the mosque, and the youth hostel. I don’t recommend it for a proper holiday, but despite being bleak and Spartan, it’s spotlessly clean and functional. Teneo Aparthotel.

The exam centre is in a part of town where there seem to be nothing but mini-markets and creepy bars. I walked through the streets for an hour and found a bakery, but I really didn’t feel like having a sandwich. I found a grotty bar with large ashtrays, but I fancied none of that, either. Then I walked past a dingy-ish restaurant front. Nothing special. Three people went in. I walked past it twice more, not convinced. Eventually, I pushed open the door… After all, there was nothing else around.

Well… Good pick! The Brasserie du Sud-Ouest is a lovely old restaurant with a fantastic moulded ceiling, repainted in modern colours and a snazzy modern chandelier. 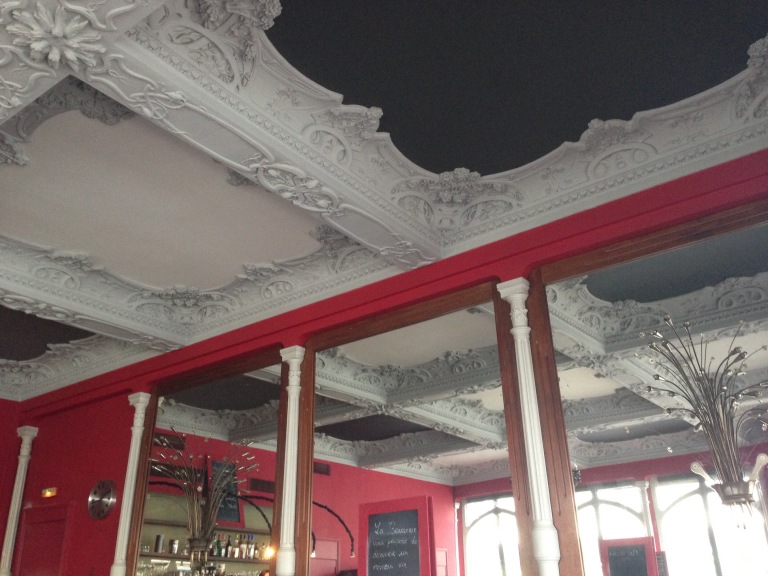 The menu was simple, but looked good, and I ordered a salad.

I have a knack for finding the best salad that is the worst for your diet.

(And, being a big fan of great toilets, theirs are delightful and have prettily framed mirrors and a silver glitter toilet seat. Yes! Very Baroque meets Saturday Night Fever.)

So, if you’re ever in Bordeaux’s bermuda triangle and in need of restauration, pop in 275, cours de la Somme. You’re not likely to be disappointed.

Oh, and if I fail my exam, I won’t be making an announcement. But if I pass… CHAMPAGNE!