We had one night in the capital before flying home to our cat and chickens. I haven’t “properly” been to Dublin since I was a student, and the city has changed so much since then, one would hardly recognize it. Ironically, therefore, it is my French hubby who knows the city better than I do, since he has been here several times on business in the past two years.

So he took me to Fire, right beside the Mansion House.

They have a pretty neat cocktail menu, but I am not a fan of sweet stuff, so I got the bartender to mix me up something dry. I gave him a hard brief: in a bar in the old part of Panama City, I had had a gin cocktail with lavender and it was divine. So I described it for him and gushed and swooned… Then I watched him set fire to a branch of rosemary in a glass which he put out with a gin mixture out of the shaker. It was also fabulous: gin, green chartreuse, a drop of vanilla liqueur and soda water. 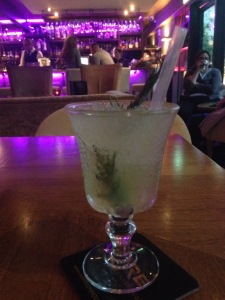 Fire seems to have been a synagogue in days gone by, but today it is a very elegant bar and restaurant.

We had a very impressive “tomahawk” steak, prepared for two with very nicely done vegetables and sauces, served on a large wooden board with an even larger carving knife. (Thank goodness there were no arguments over dinner.) We were surprised, though, that there weren’t more people in the place. On holidays in Spain, maybe?

The day had been lovely and touristy to a T. We strolled through the streets and took the kids to see the book of Kells at Trinity College. We had a drink in a pub in Temple Bar and even had an encounter with a leprechaun in Grafton Street. Pretty good for a Thursday.